On diabetic patients, healing may be compromised, for that reason you will need your doctors approval before undergoing treatment.

In terms of caution, being a diabetic patient is classed as (strong) cautionary. However as the severity of a diabetic condition differs from person to person, treatment suitability should be assessed on a case by case basis taking into account: if the patient’s condition is well-controlled, healing ability, propensity to develop infection and depending on the location and style of tattoo. Safety is paramount at LaserYou so a diabetic patient must consult their GP and get approval in writing, then be referred to the clinics insurers. Laser Tattoo Removal is less likely to be approved on a patient with type 1 diabetes.

Can the PicoSure laser be used on Raised Tattoos?

A raised tattoo is fairly common – essentially it is where the tattoo does not appear flat but rather it appears inflamed and swollen.  There can be many reasons for a tattoo to be raised including an allergic reaction – this is rare but most common with red inks although they would usually present as consistently itchy as well. Laser tattoo removal will not usually be recommended in these situations and a dermatologist should determine the best course of action including excision.

More commonly raised tattoos are correlated with a heavy-handed application technique associated with scar tissue forming and along with excess volume of ink.

Some tattoos are reported to temporarily raise up and possibly itch in conjunction with exposure to extremes of temperature, dehydration, heightened histamine reactions to hayfever for example, and even sun exposure etc.

Laser tattoo removal with the PicoSure is possible on raised tattoos and it is fine to proceed in treating raised tattoos unless an allergic reaction is suspected, in which case laser tattoo removal is not usually recommended and a dermatologist should determine the best course of action including excision. At LaserYou, our technicians are trained medical professionals. Come and see us at a free consultation so that we may assess your raised tattoo.

You do not need to bring anything specifically for your treatment; at LaserYou, we supply a professional goggles to wear while undergoing Laser tattoo removal.

Advances in technology never cease to amaze us. Scientists have now developed smart tattoos – ones that will actually monitor your blood sugar levels and will change colour as a way to warn you. So your tattoo can be a form of art as well a life saver! Read this article for more information: https://www.engadget.com/2017/10/01/smart-tattoos/

Safety in Laser Treatment is so important.

A new client expressed surprise when we asked her to wear safety goggles while undergoing laser treatment for tattoo removal. She explained that at her previous clinic she was only offered a blindfold to cover her eyes while the laser was being used! This is probably one of the more shocking stories we have heard. A laser machine is a high-tech, high powered piece of equipment which needs to be taken seriously and professionally. The direct beam and reflections from the laser can cause serious damage to the retina of the unprotected eye. Damage to the eye can occur from exposure to laser which could cause retinal burns and impair the vision.

It is not enough to simply wear UV sunglasses. The laser goggles must be must be compliant with the laser machine and CE marked in order to provide protection against accidental exposure to the Laser. At LaserYou, our safety goggles are supplied by the manufacturer and fully safety compliant for use.
Always check if your clinic / laser technician are safety compliant. Ask them if they provide safety goggles which are compliant with laser machine for laser tattoo removal.

Diabetics will most likely experience issues with healing post tattoo removal. For this reason, treating a diabetic patient is classed as a (strong) cautionary. As the condition of diabetics vary, we assess each client on a case by case basis taking into account the following: if the patient’s condition is well-controlled, healing ability and propensity to develop infection. We also need to consider the location and style of tattoo. Diabetic patients should ideally consult their GP first and get approval for treatment in writing. As a further precaution at www.laseryou.co.uk we may then refer the patient’s case to our insurers. Treating a diabetic patient with Type 1 diabetes is less likely to be approved for tattoo removal.

Of course at the time you get a tattoo, you know it is for life and that it is the right decision at the time. However things don’t always turn out the way you expect. Take Melanie B from the Spice Girls. On a recent Piers Morgan show, she revealed that she resorted to drastic measures to remove her tattoo – the name of her ex spouse. She chose to have the tattoo surgically removed – she wanted the tattoo removed immediately.  It is believed that she stored the cut out tattoo in a glass jar! Of course this is a desperate measure. Not something we would recommend at LaserYou given the complications of infection and scarring.

It is well excepted that laser tattoo removal even though it is the most advanced method for removing tattoos, is a process. It can take up about two years to remove a tattoo given that the treatment is eight weeks apart. (Please note having more regular treatment will not produce any faster results). However it is recognised as being the safe method for tattoo removal when performed by a trained, qualified and insured technician.

Patience and perseverance is the key. After all good things come to those who wait. 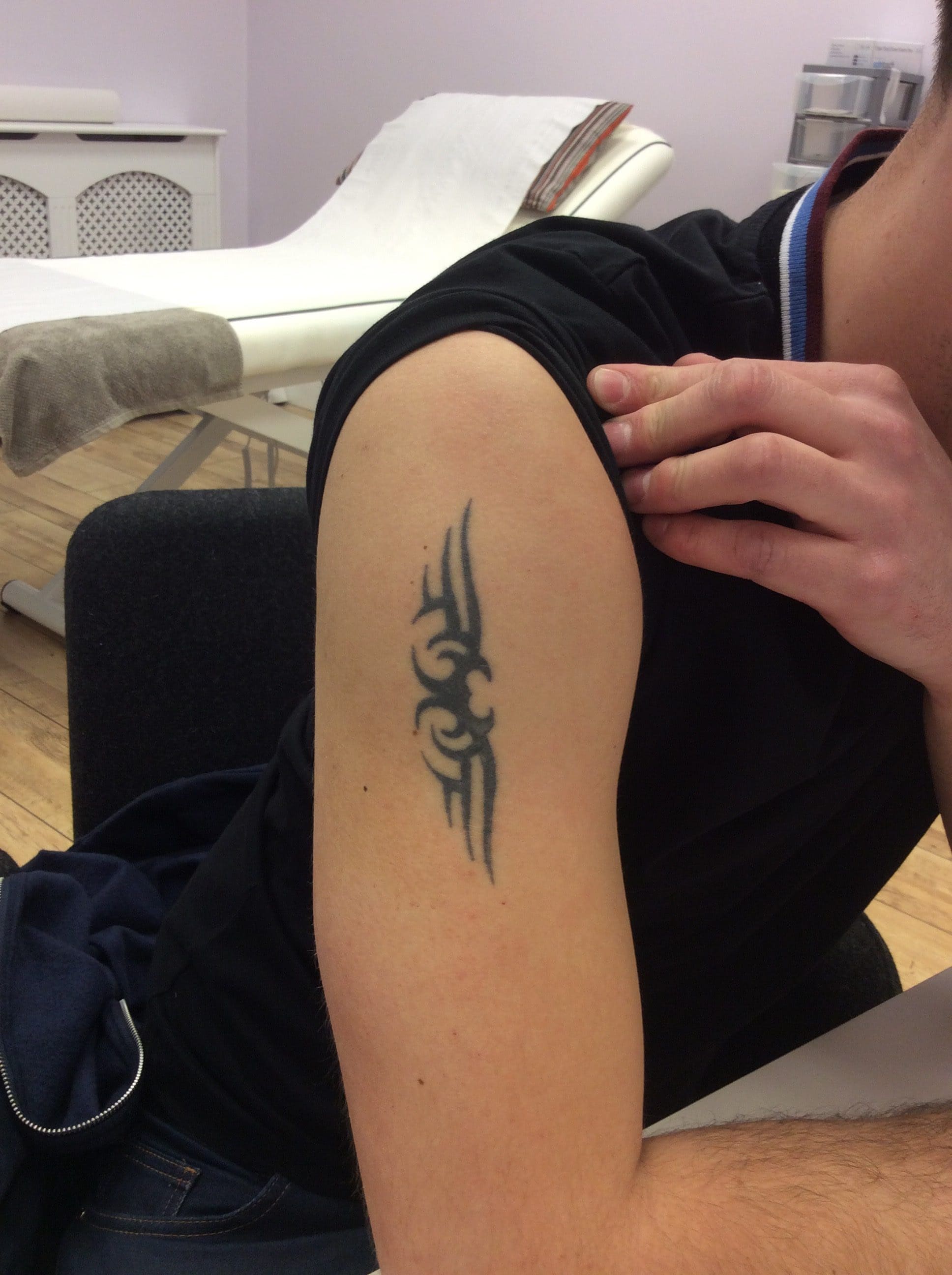 I just want a cover-up. Can your laser tattoo removal work for me?

Many clients do not want to remove their tattoo completely. Instead they are simply looking to lighten the tattoo enough to get it to a stage where it can be covered up.

It is quite possible to achieve a faded tattoo with a laser machine. At LaserYou we use the PicoSure laser which uses the most advanced technology for tattoo removal.  The laser machine works by gradually breaking down the ink blocks which are otherwise resistant to change. It will take years, decades and possibly more than a lifetime to fade a tattoo depending on the type of ink used. That is why a laser machine is the optimum choice for tattoo removal. As the treatments are every eight weeks, the process is a gradual one. Therefore typically clients will see gradual fading of the tattoo ink. Depending on the type and depth of ink, the time it takes to fade a tattoo does vary. Black ink is certainly the easiest colour to break down.

If you are looking to fade your tattoo, you would simply need to monitor the fading every eight weeks until you get to a stage where your tattoo artist can effectively enable a cover-up on the existing tattoo. 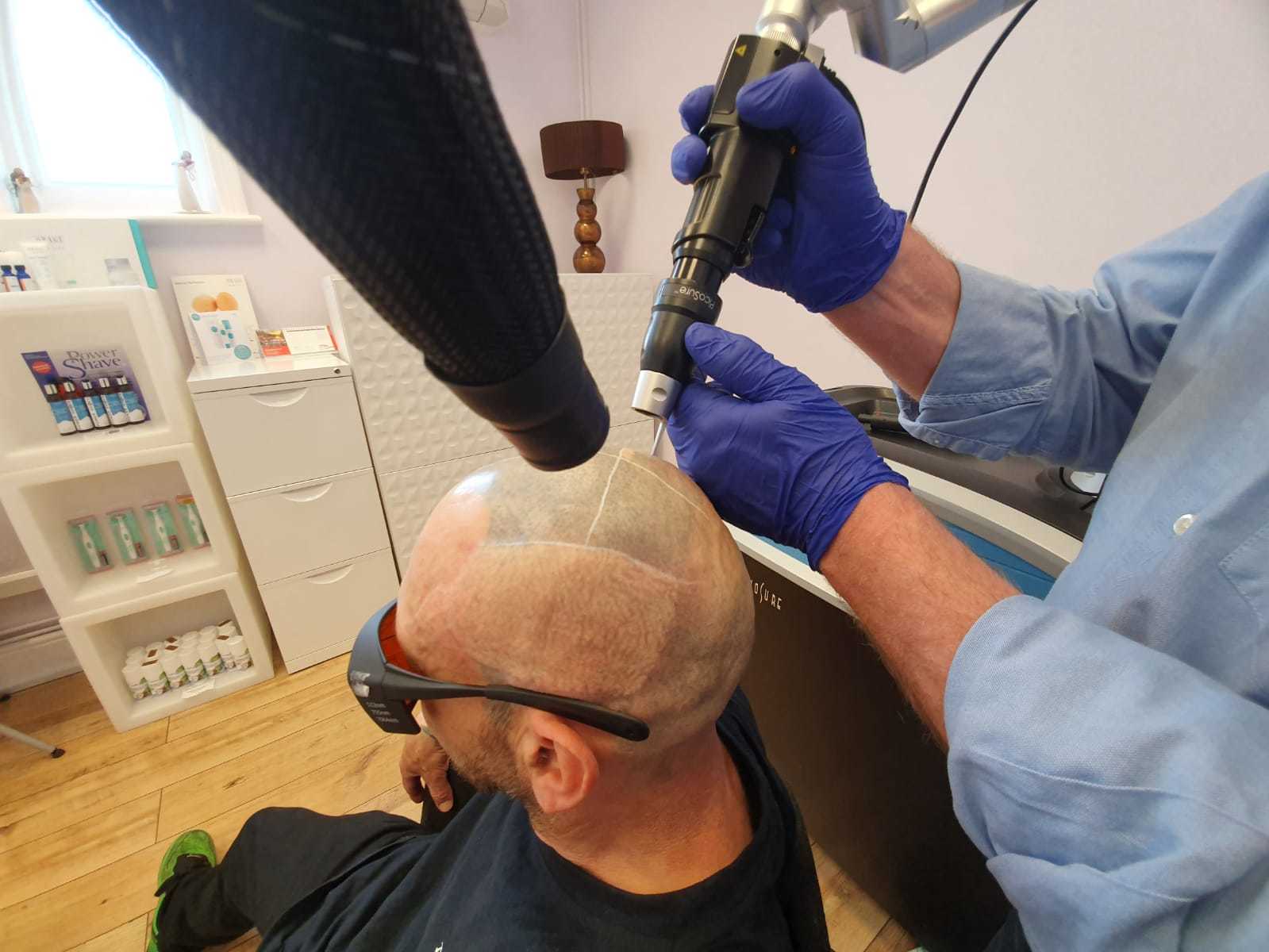 Removing the Ink from a Head Tattoo

Tattooing the head is fast becoming a choice for men loosing their hair.
Where traditional tattoo ink has been used to apply colour to the scalp, we can use the PicoSure laser on that area. One of our clients at LaserYou no longer wanted the colour on his scalp as the colour had changed.
Please note using a laser machine on the head can temporarily affect the hair growth within that area – although it is very low risk; The pulse duration is in fact far too short to create a thermal effect required to reduce hair growth in the long term. Contact us for professional advice on tattoo removal. 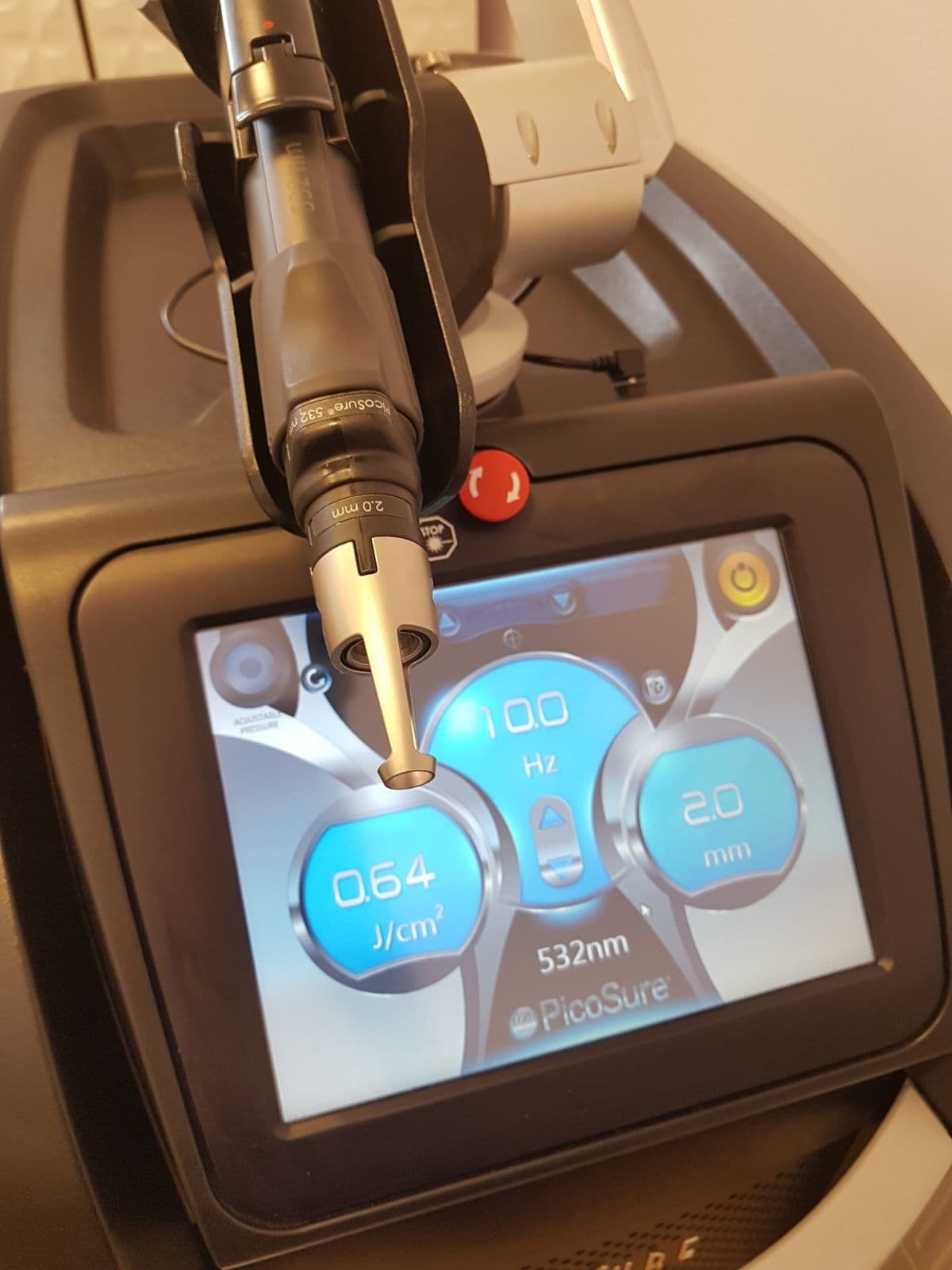 Cancer patients who are undergoing radiotherapy treatment will often be tattooed so that the treatment can be targeted to a certain area. Typically 1-5 dots are tattooed onto the area. The mark are used to help align the radiotherapy laser. These pinpoint dots are tattooed in the same way as a traditional tattoo And are therefore permanent. Of course it is a matter of choice to either keep or the movies. At LaserYou we will remove the radiation tattoos for free.

The PicoSure laser can indeed be used to remove radiation tattoos after all the Radiation Tattoos are not applied any differently to traditional tattoos. We must ensure it has been 24 months since the patient received their last radiotherapy or chemotherapy. We will also need a letter from their oncologist to confirm these dates and to ensure the doctor is happy they can go ahead with the removal process.